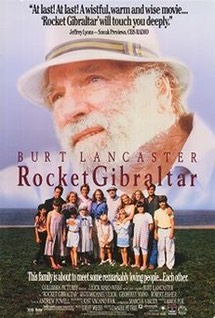 ROCKET GIBRALTAR (1988) is about an old family patriarch who unites his family at his summer home for his “final” birthday. It stars Burt Lancaster and Suzy Amis and was filmed almost entirely at an oceanfront mansion in the Murray Compound in Southampton. The dramatic ending, which the patriarch, who has given instructions to his young grandchildren about what they ought to do with him after he dies—which is to set his body off into the surf in a flaming rowboat fire, in Viking fashion—took place at Sagg Main Beach. Kevin Spacey has a small part in this film, and Macaulay Culkin plays one of the children.. (Dan’s Papers 10-2013) added 11-2-16

First premiered at the AFI Theater in 1988, this Amos Poe-scripted drama about an elderly blacklisted writer (Burt Lancaster) and his extended family during a birthday celebration on Long Island is both provocative and moving, a genuinely affecting family drama that has undercurrents of both absurdity and pathos and an ending that is truly bizarre. Particularly noteworthy is the rapport between Lancaster and future “Home Alone” star Macaulay Culkin (in his motion picture debut), who have what is certainly one of the most comfortable and unaffected grandfather-grandson relationships ever filmed. ~ Hal Hinson, The Washington Post