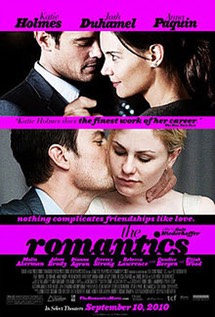 North Fork of Long Island in the following areas:

~ “The Romantics” was first brought to my attention by Kathleen Carley, a Facebook friend, who is credited with her permission.

Liv Tyler was first cast as Laura, but was replaced by Katie Holmes, who also was the film’s executive producer.

Filming took place from November to December 2009 in the Town of Southold. The movie premiered at the 2010 Sundance Film Festival.

It had its world premiere during the 2010 Cannes Film Festival.

Ricki and the Flash