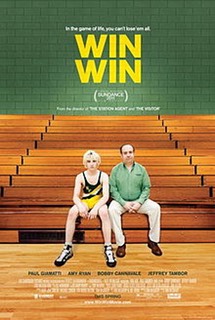 Filming took place at a variety of locations, the most frequently mentioned are:

One incident I recall* concerns the shoot for the movie Win Win.  It reminds me of the power of motion pictures to transform our perceptions of everyday things, even Mother Nature.  The scene, shot at the LIRR’s Port Washington station in mid-March, was supposed to be of the two stars of the film (Paul Giamatti and a teenage actor) waiting for a bus at a depot (in this movie the Port Washington LIRR station portrayed a New Jersey bus station) along with several dialogue scenes.

The scenes were supposed to be taking place in the middle of a freezing northeast winter day.  The only “problem” was on that particular day Mother Nature decided to give a preview of the summer season, skipping spring, with the temperature hitting 90-degrees under sunny skies.  The film crew was wearing shorts and tee-shirts.  Actors and extras donned heavy parkas, woolen beanies and heavy duty winter gloves.  I wish I had the water and dry cleaning concessions that day!  Upon viewing the movie you could not tell what the real story was behind those LIRR scenes.  It appeared to be a freezing winter day – a product of good acting and the power of motion pictures.

*GUEST AUTHOR MIKE CHARLES: MANAGER OF PUBLICATIONS & SPECIAL PROJECTS FOR THE LIRR SHARES TALES OF THE TRAINS IN FILM