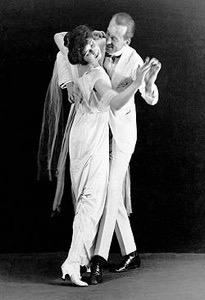 “The Vitagraph studio set up shop in Flatbush around 1905, then opening a satellite facility in Bay Shore about 10 years later, followed by the Famous Players-Lasky Studio, built in Astoria in 1920. (A few years later, it would become a home for Paramount Pictures, producing more than 120 films in the ’20s and ’30s.) The stars lived nearby, in Bayside (Gloria Swanson, W.C. Fields), Great Neck (Groucho Marx) and Manhasset (Vernon and Irene Castle). The Castles starred and danced in The Whirl of Life, a 1915 comedy shot in part in Long Beach.” ~ Joseph V. Amodio | Special to Newsday | January 3, 2012 (Read Full Article – Silents Were Golden on Long Island)

*Ruth Gordon began her career early, posing as a picture baby for Mellin’s Food. In 1915, Gordon appeared as an extra in silent films that were shot in Fort Lee, New Jersey, and elsewhere, including as a dancer in The Whirl of Life, the film based on the lives of Vernon and Irene Castle.