That Summer (Associated with Grey Gardens) 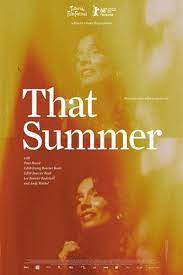 Peter Beard discusses his work as a photographer, artist and diarist before reminiscing about his attempt to make a documentary in the summer of 1972 with his friend Lee Radziwill (younger sister of Jacqueline Kennedy Onassis), focusing on their childhood and the 20th- century history of East Hampton.

The following was sent to us from a site visitor:

“That Summer,” a film released in 2017 that was shot in 1972. It was basically an attempt to shoot “Grey Gardens” three years before “Grey Gardens” was made. Filmed in Montauk at Andy Warhol’s Eothen estate on the ocean and artist Peter Beard’s windmill house also in Montauk, it includes shots of Warhol, Capote, Jagger, and Lee Radziwill and–of course–the nutty Beale ladies in East Hampton.  See… https://www.imdb.com/title/tt7057306/

1 hour and 20 minutes – The reels of that first contact were shelved for 45 years. This documentary recovers the lost footage.

Albert and David Maysles’ classic GREY GARDENS immortalized the estate of Edith and Little Edie Beale, relatives of Jacqueline Bouvier Kennedy, who lived in alarmingly poor conditions. But there is more to the story: it was Lee Radziwill and Peter Beard who first brought the Maysles to the Beales, when the two set out to make a film about Radziwill’s childhood. The reels of that first contact were shelved for 45 years. This documentary recovers the lost footage. Anchored in Beard’s recollections and artistic vision, we are returned to “that summer” in 1972, a seductive dream world and collage of radically unconventional creative personalities—Warhol, Bacon, Jagger, Capote—practicing the art of living amidst oppressive forces of class expectation and prejudice.

Grey Gardens Before And After And After

THE FULL CAST DESERVED TO BE LISTED