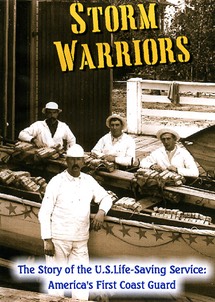 Riding rough seas on the Cross Sound Ferry at the mouth of the Long Island Sound between Orient Point, NY and New London, CT (aerial view)

Storm Warriors was an Official Selection of the Long Island International Film Expo (LIIFE) in 2000, and was described in the program guide this way – Mr. Garber’s “… documentary tells the under-examined story of the United States Life-Saving Service. From 1871 to 1915, before the advent of radios, motorized rescue boats, and the modern Coast Guard, in brutal storm conditions, thousands of men put their lives on the line to rescue otherwise doomed sea-goers. It was a time when feats of unprecedented humanitarianism were combined with iron courage and self-sacrifice, a time when a select crew of men rescued the lives of many.”

To find out about another facet of Long Island’s seafaring history, in particular the Montauk Point Light, please take a look at Mr. Garber’s documentary, First Light: Montauk Point Lighthouse which is also included on this website