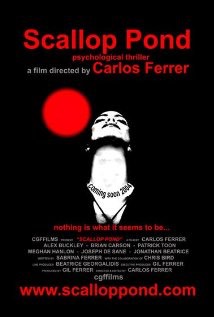 Scallop Pond is a psychological mystery/thriller where greed, sex, and selfishness push life beyond reality and nothing is what it seems to be. Our story takes place in the plush town of Southampton, New York. Nights are tarnished by mystery and fear when young men are murdered without a trace of a motive. The story revolves around Carla Wilson, a famous mystery writer, her sister Erika, and the people who surround them. An obsessive fan with peculiar demeanor shows up in the most unexpected places and the two sisters later fall under suspicion when the trail of dead men leads to their door.~ by Sabrina Ferrer, Writer

This was Carlos Ferrer’s first feature-length movie. According to a number of sources, Ferrer was just 16 years old when filming commenced.