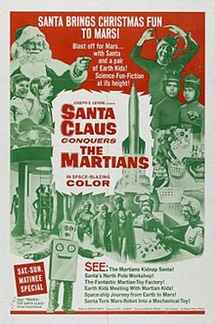 Paul L. Jacobson (based on his story)

Santa Claus Conquers the Martians was filmed in about 4 days at Michael Myerberg Studios located at Roosevelt Field in Garden City. The Myerberg facility had once served as a hangar, a remnant from when the property was used as an airfield for military and commercial use.

A bit more from Wikipedia

Scent Of A Woman
Scroll to top
error: Content is protected !!