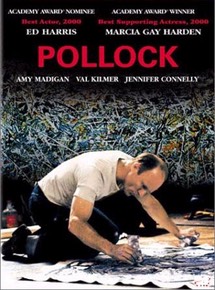 Steven Naifeh & Gregory White Smith (based on their book)

The Pollock-Krasner House and surrounding property located in Springs.

Various village, beach and roadways in Springs and the Town of East Hampton, some of which are shown in the trailer below.

The familiar bicycle/beer bottle mishap scene, briefly captured in the trailer at 2:03 and more completely shown in the second video, was shot on the Old Stone Highway near the intersection with Springs-Fireplace Road (aerial view). The second video clearly shows the Springs Cannon and the Parson’s Blacksmith Shop in the background. As you can see from the aerial view, the iconic Springs General Store, where Pollock would haved purchased (or likely bartered for) food and drink, is less than a half-mile from the Pollock-Krasner House.

POLLOCK (2000) is about the life and career of American painter Jackson Pollock. It stars Ed Harris and Marcia Gay Harden and was filmed almost entirely at the former home of the late abstract expressionist painter in Springs, with other scenes at the Southampton railroad station, the old Miller Store and Springs Fireplace Road. Marcia Gay Harden received an Oscar for her performance. (Dan’s Papers 10-2013) added 11-2-16

More than a straightforward biography charting Jackson Pollock’s rise to prominence, Ed Harris’ film is a penetrating study of the work ethic as it applied to one of America’s great post-war painters. ~ Urban Cinefile

The film was a long-term dream of Ed Harris who produced, directed and starred in Pollock. After his father gave him a copy of the artist’s biography, he started to think about the project which took almost 10 years to bring to the screen.