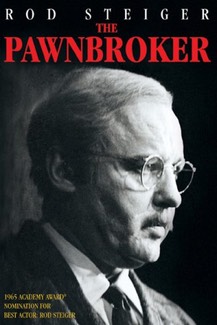 Rod Steiger was nominated for an Oscar as Best Actor in Leading Role for his work in The Pawnbroker.  The winner that year was Lee Marvin in Cat Ballou.

Steiger was practically certain he was going to win the Academy Award when he arrived at the Oscar ceremony. Right before the award was announced, the actor began to button his jacket in anticipation of leaving his seat and walking down the aisle. Instead he heard the name “Lee Marvin!” “I was absolutely shocked,” said Steiger. “And Lee Marvin walked up and got a prize he probably and justly deserved, and I got a spanking from the forces of nature which said, ‘Listen, jackass, never take happiness, never take your talent, for granted. Never, in any walk of life, take for granted your capabilities. Each minute a second of life is a challenge – so sit still, schmuck, and let this be a lesson to you. Happiness has to be earned and respected. Rewards must never be taken for granted.’ I never forgot that moment” ~ from “Rod Steiger: Memoirs of a Friendship by Tom Hutchinson”

Perils of Pauline, The
Scroll to top
error: Content is protected !!