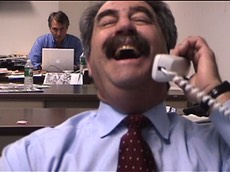 A dark comedy, Paperman explores the desperate mind of a newspaper editor/reporter/paperboy pressured into coming up with the “Big Story” by his abusive boss. Writer/Co-Director Robert Snyder stars in the title role. His mother, Eleanor Snyder, co-stars as his bed-ridden grandmother, Howard Swengler gives a scene-stealing performance as the Boss from Hell, and Ralph Edsell, a Snyder Films regular cast member, plays a tormented actor/friend.

Out Of Towners, The

Pawnbroker, The
Scroll to top
error: Content is protected !!