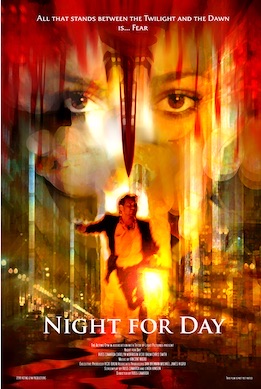 New York City at night is the perfect mask when you need to disguise yourself from the day. Vincent is a guitar player. He has played his music in obscurity, in the dark his whole life, too afraid to take a chance on being more… too afraid to reveal his true self to anyone. There is a reason… To step out of those shadows and unveil his bond to the occult, underworld society of sex, murder and addiction that has sustained him…would mean his life. But then Vincent meets Laura, a beautiful, young woman, unlike any he has ever met. She doesn’t know the reality of his deadly secret life and offers him love for the first time. For once, Vincent realizes he can choose his destiny. Laura’s chance at a “normal” life waits for Vincent at daybreak but he will have to survive the night to reach her. On his journey to the sunrise he is hunted down by Vanessa, a deadly and mysterious woman who looks to avenge the hidden sins of Vincent’s past. Along the way, as well, Vincent is tempted back into the world he is racing to leave behind by Derrick, the charismatic leader of the ancient criminal circle that has protected him his whole existence. To make it from the twilight to the dawn Vincent must face his fear and be willing to pay the ultimate price in the sunlight for one true moment of love.—Russ Camarda