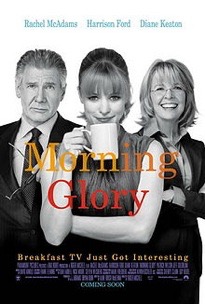 Mineola including Kiss the Chef (Becky in coffe shop) and WTHE/1520 AM Studio.

East Meadow including Eisenhower Park (Becky calling from a NJ park on her phone).

Despite their long careers in Hollywood, Diane Keaton and Harrison Ford had never met until they co-starred in Morning Glory. Harrison Ford explained: “We have been working in the same business, different branches of the business. She was in the intellectual branch and I was in the running, jumping and falling down branch. So, we never had the chance to work together. But it was a real pleasure to finally get that opportunity.” This is Keaton’s and McAdams’ second film together. They previously co-starred in the 2005 comedy/drama The Family Stone. ~ Wikipedia