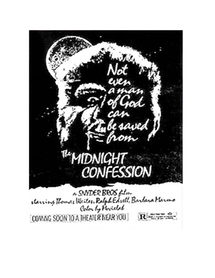 A tormented priest hears the confession of a young man with a lycanthropic problem.

“One of the lead actors in Midnight Confessions, Thomas G. Waites, has appeared in Hollywood films such as The Warriors, The Thing and And Justice for All with Al Pacino.” ~ Philip Snyder

Michael aka I Am Michael