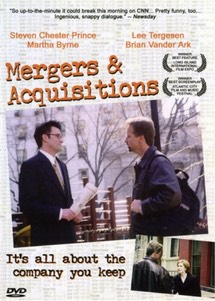 The program guide described Mergers & Acquisitions as a “…feature film [which] follows Del Richards, a 35-year-old idealistic, underachieving corporate worker who has spent the last ten years of his life writing for American Homework, a trade magazine covering the home improvement field. By his own admission, he has fallen short of his goals, but things are starting to get interesting. He has started to date a new writer at the magazine, his rapidly deteriorating hippie mother has gotten herself into trouble and Del has to decide whether to help a rival corporation take over Homework. Del’s decision and his handling of the consequences, will test the strength of the values he has espoused his whole life. Mitchell Bard (formerly of Mineola, Greenlawn and Port Washington) of Bayside writes, directs and produces this feature film partially shot in Syosset and Huntington. This film stars Steven Chester Prince (Perfume), Brian Vander Ark (lead singer of The Verve Pipe), Lee Tergesen (Oz, Wayne’s World, Shaft), and Martha Byrne (As the World Turns).”

Michael aka I Am Michael
Scroll to top
error: Content is protected !!