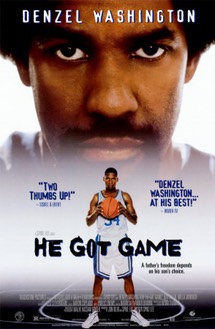 “Basketball is described in Spike Lee’s latest movie, He Got Game, as ‘poetry in motion’, but Lee attaches a cynical twist to that notion. We may root for our home team, but those of us who were not born yesterday know that the game is not one propelled exclusively by the fancy of an inspired muse but one which is driven by the attraction of cold cash.”

“In He Got Game, [actor Ray] Allen, actually a pro basketball player with the Milwaukee Bucks who can really act, plays a graduating high school student in Spike Lee’s native Brooklyn who has received so many offers from colleges that he needs time to consider his options. Surprisingly enough, money does not seem uppermost in his mind: this can be explained by his disgust for the greed of those surrounding him. Everyone wants a piece of him. A slick sports agent for a pro-team shows him his Long Island home, which boasts a stable of cars worth well over a million and a basketball court built right into the dwelling that could have been used for four bedrooms. ~ Reviewed by Harvey S. Karten