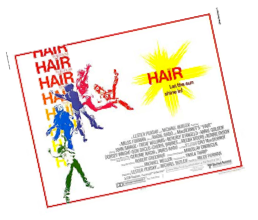 Originally an Off-Broadway rock musical, Hair made its debut in October 1967 at the Joseph Papp Public theater.  The show then opened on Broadway in April 1968 and ran for 1,750 performances.  It was also simultaneously produced in cities in the United States, Europe and elsewhere.

The score of Hair saw chart success and praise, as well. The 5th Dimension released “Aquarius – Let the Sunshine In” in 1969, which won Record of the Year and topped the charts for six weeks. The Cowsills’ recording of the title song “Hair” climbed to #2 on the Billboard Hot 100, while Oliver’s rendition of “Good Morning Starshine” reached #3. Three Dog Night’s version of “Easy to Be Hard” went to #4.

Gerome Ragni and James Rado, who wrote the original musical, were unhappy with the film adaptation, saying it failed to capture the essence of “Hair” in that hippies were portrayed as “oddballs” and “some sort of aberration” without any connection to the peace movement. They stated: “Any resemblance between the 1979 film and the original Biltmore version, other than some of the songs, the names of the characters, and a common title, eludes us.” In their view, the screen version of Hair has not yet been produced. Nevertheless, the film received generally favorable reviews from film critics at the time of its release. ~ Wikipedia

He Got Game
Scroll to top
error: Content is protected !!