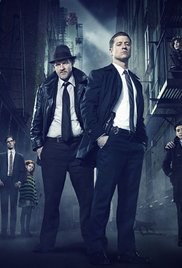 Expected to be shooting at:

Today, filming began on the highly anticipated new FOX series Gotham in New York and we have a few more details about the shoot.

Today, GOT production signs (which we believe are for Gotham) were spotted in Glen Cove, NY. The base camp was set up in Morgan Park and the signs were posted along Crescent Beach Rd. As one reader pointed out, there are several old Gold Coast Mansions in this area that could perhaps double for Wayne Manor. 3-14-14

The origin story behind Commissioner James Gordon’s rise to prominence in Gotham City in the years before Batman’s arrival.

‘Gotham’ Showrunner on More Bruce Wayne, Arkham and What Lies Ahead 1-5-15

‘Gotham’ Extended Trailer Features the Penguin, Catwoman, Poison Ivy and the Riddler Before They Were Famous (Video)  8-20-14