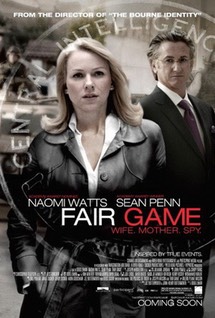 Joseph Wilson (based on his book)

Valerie Plame (based on her book)

“In ‘Fair Game’, Doug Liman mostly avoids delivering a political treatise. Instead, he strips the Valerie Plame affair down to its essential elements: the bare facts of the case, the uneasy mix of the public and private lives of a D.C.-area family where Mom is a spy and the life-changing upheaval – including a marital rift – caused when her identity is blown for political purposes. This allows a viewer to better understand these two people who were so much the center of attention in the U.S. seven years ago.” ~ by Kirk Honeycutt | October 14, 2010 | The Hollywood Reporter