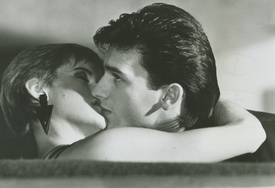 Disco! The Final Dance was largely filmed at the Club Marakesh in Westhampton Beach and, strangely enough, just happens to deal with the fictional story of a young black man who was beaten by a gang of whites with Marakesh used as a backdrop.  The brutality of a racially motivated REAL attack occurred on Memorial Day 1996, and just shortly AFTER filming had finally concluded.  Interestingly enough, the movie had its first screening in Manhattan on Thursday, August 29, 1996, almost three-months to the day after the REAL attack occurred at the Westhampton Beach nightclub.

Here’s a brief article that appeared in the New York Daily News just days before the screening.

“Fred Carpenter, who has been filming ‘Disco! The Final Dance’ inside Marakesh for the past year even BEFORE the [Shane] Daniels incident, told The News’ Debbie Tuma that he was talking about plans for his film with the club’s owner Ned Dougherty just three hours before Daniels’ beating. Carpenter, who’s never actually seen a fight in the club, much less a racial incident, said his movie, set in 1979, is about ‘…a 28-year-old black man who comes into the club and starts dancing with a white woman, and who gets beaten up by a group of white mob wannabes.’ Dougherty, by the way, is getting out of the club business; Marakesh will be sold at auction later in September.” ~ by A.J. Benza & Michael Lewittes | New York Daily News | August 27, 1996

Disco! The Final Dance, a feature length drama by Fred Carpenter, a Long Island resident, was also shown at the Long Island Film Festival where it was screened as part of the 1997 Stony Brook Summer Film Festival.

The film “…follows seven characters on New Year’s Eve 1979 as they prepare for the end of the disco era and the beginning of new lives in the 1980s. The film was shot in Club Marakesh in Westhampton and contains a racially motivated incident similar to the one that closed the night club last year.” ~ by Barbara Delatiner | New York Times | July 20, 1997

Domino One
Scroll to top
error: Content is protected !!