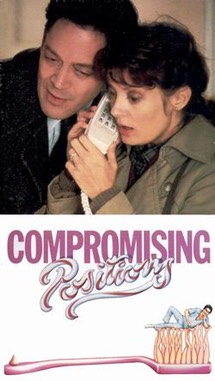 Joan Allen has a minor part in “Compromising Positions” playing Mary Alice Mahoney; it was her first role in a full-length feature film.  Just a year later Allen rose to prominence as Reba McClane, a sightless young woman and love interest of a serial killer, in the thriller “Manhunter”, and again as Maddy Nagle, one of Kathleen Turner’s high school friends, in Francis Ford Coppola’s comedy, “Peggy Sue Got Married”.  For the record, neither “Manhunter” nor “Peggy Sue Got Married” were filmed on Long Island.