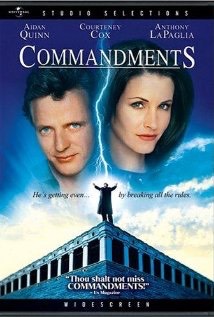 “Although it doesn’t quite work on every level to which it aspires, this highly creative misfire from director Daniel Taplitz recalls other noble failures such as Joe vs. the Volcano (1990) and A Pyromaniac’s Love Story (1995) in its loopy, addled charm. Purposely offbeat, Commandments mixes magical realism with eccentric characters and dark comedy to result in a bizarre but entertaining stew that can never quite be taken seriously when it’s sober and is never quite hilarious when it’s not. It’s a singular style that may be interpreted as ‘confusing’ by the masses, but this intriguing sub-genre does have its admirers and those with unusual tastes will appreciate it. The presence of producer Ivan Reitman would lead a credits-reader to expect something broader, but Commandments is for gourmands only.” ~ Karl Williams | Rovi | AMG Review