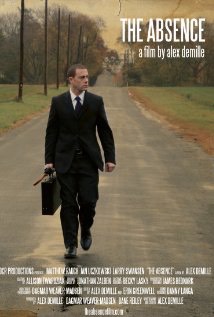 Filming took place in a variety of locations in Suffolk County. Filming locations included the communities of Jamesport, East Marion at Dam Pond Maritime Reserve and Orient on the North Fork (aerial view), as well as Montauk Point (aerial view) on the South Fork, and the frequently used Oheka Castle (aerial view) in Huntington.

Special Note: The Dam Pond Maritime Reserve/Preserve was recently renamed in honor of Ruth Oliva, an outspoken environmentalist and protector of the land surrounding Dam Pond.

The Absence was an Official Selection at the Long Island International Film Expo (LIIFE) 2011, and was awarded the Best Student Film prize for that year. The film tells the tale of “A corporate bureaucrat [who] is sent to a mysterious town, where he confronts the devastating consequences of his work and must choose whether to continue to obey his messianic boss.”

The Absence has been screened at many festivals, and was nominated and received many accolades in addition to the LIIFE 2011 award cited above.

Click HERE for the Official Website including Screenings, Nominations and Awards, a Trailer, News, Behind the Scenes and much more.

Irish Whiskey Rebellion, The aka A Change in the Wind
Scroll to top
error: Content is protected !!