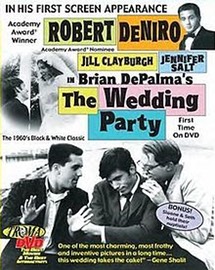 Its simple plot focuses on a soon-to-be groom and his interactions with various relatives of his fiancée and members of the wedding party prior to the ceremony on the family’s estate on Shelter Island. The independent film was a joint effort by Sarah Lawrence theatre professor Wilford Leach and two of his students, protégé Brian De Palma and wealthy Cynthia Munroe, who bankrolled the project. The film was made in 1963 but not released until six years later, after one of its supporting players, Robert De Niro, had begun to draw notice for his work in off-Broadway theatre and De Palma’s 1968 release Greetings.  ~ Wikipedia