Under Surveillance aka Dark Chamber 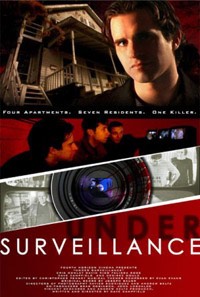 Note: The only filming location cited on IMDb (Internet Movie Database) is Northport. Other sources also include Huntington, Commack, Oakdale and Sayville as filming locations.

Under Surveillance was chosen as the Best Long Island Feature Film at the Long Island International Film Expo (LIIFE) in 2006. The film focuses on Julian Besler, who moves back to his father’s house – a house that has been renovated to support four apartments, seven people…one killer. Believing one of his new housemates is behind a brutal series of crimes, Justin places them under video surveillance. It’s a question of who and why. “It’s part Rear Window, it’s part Scream, says co-star David Rigg. “Lot’s of twists and turns. It’s just flat out scary fun…a phenomenal first film”.