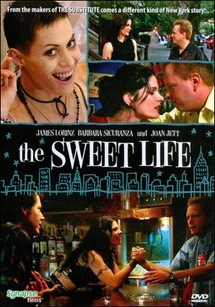 The Sweet Life After was chosen as an Official Selection at the Long Island International Film Expo (LIIFE) 2003. The program guide has this to say about the movie – Manhattan meets The Brothers McMullen in this bitterly funny tale of two brothers-one shy and insecure, the other a gregarious cad-vying for the affection of a tough and sexy bartender who harbors a secret ambition only one of them understands. A romantic comedy for people who hate romantic comedies. This world premiere shot in 2001, partially in Great Neck, Long Island. Stars: Joan Jett (Rocky Horror Picture Show), James Lorinz (The King of New York), and Barbara Sicuranza (Margarita Happy Hour). Language, sexual content.

Stuff Heroes Are Made Of, The – silent/short