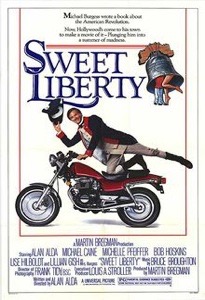 SWEET LIBERTY (1986) is a comedy by Alan Alda, of Mecox, about the making of a movie from a scholarly book about the American Revolution. So it a film within a film. It stars Alda and Michael Caine and was filmed almost entirely in and around Sag Harbor. The film company actually “rented” Main Street, Sag Harbor for a night, filming the principals walking down a largely deserted Main Street after an evening of revelry. Revolutionary War battles, re-created for the film within a film, were shot on the grounds of a former religious retreat in Noyac. I was an extra in the night scene on Main Street, and was a reporter covering the big Redcoats battle up at the retreat, and have good memories of both experience (Dan’s Papers 10-2013) added 11-2-16