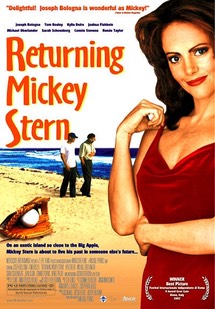 Returning Mickey Stern was an Official Selection at the Long Island International Film Expo (LIIFE) in 2002, and was awarded the Festival Prize – Best First Feature for that year. It is the story of…Mickey Stern, a wildly naive 17 year old kid [in 1950] who discovers magical Fire Island for the first time. There he meets his true love Leah. Mickey wants the American dream to play baseball and stay with Leah, but the Korean War intervenes. Fifty years later, Mickey (Joseph Bologna) still has dreams of playing for the Bronx Bombers. He returns to Fire Island with his best friend Harry (Tom Bosley). There he meets a young woman who bears an uncanny resemblance to Leah and a young man who is a 17-year-old version of himself. This is Mickey’s last chance to right past wrongs, and he has just one week to do it.

If you missed it on the Website, please take a look at the Press Kit and Press Release

Ricki and the Flash
Scroll to top
error: Content is protected !!