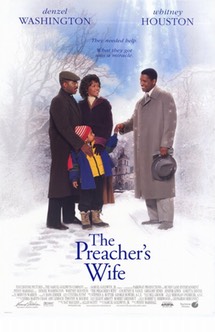 Robert Nathan (based on the novel The Bishop’s Wife*)

Lake Success – A private residence which appeared in the movie as the home of Joe Hamilton (played by Gregory Hines). As recently as February 2012, the home in which some scenes were shot appeared in a number of articles announcing that the property is currently for sale. According to these reports, “Houston never shot a scene at the house, which is on the market for $5.88 million dollars. But the sellers [also] say she did spend a day at the home during filming, which lasted three to four weeks. Washington appeared in scenes in the living room, dining room and outside. The white stucco modern neoclassic home has also been featured on USA’s “Royal Pains,” advertisments and commercials for Jimmy Choo and Budweiser, and the first-ever episode of MTV’s “Cribs”. ~ Valerie Kellogg | RICH CRIBS

The Preacher’s Wife is a remake of the 1947 film The Bishop’s Wife.

“The Preacher’s Wife: Original Soundtrack Album” is the best-selling gospel album of all time. The soundtrack also remained at number one for a record twenty-six weeks on the Billboard Top Gospel Albums Chart.

Pretenders, The
Scroll to top
error: Content is protected !!