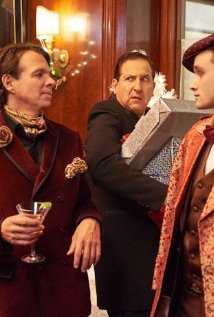 “Nick and Nicky” is a modern day screwball comedy and murder mystery inspired by the many classic Hollywood comedies of the 1930s and 40s.  Essentially, the movie invokes the sparkling, witty spirit of these films and recreates it in an upscale, modern day, gay setting.  The two primary characters are a very wealthy, attractive, gay couple, one older, the other younger who have returned to New York City in order to get married.  However, they end up embarking on a crime solving adventure.

The main character is Nick Darling, a dapper, charming, private investigator in his 40s who is both a dedicated private eye as well as an openly gay bon vivant.  His partner and future husband, Nicky, is very wealthy, good looking, and much younger.

Nick and Nicky have returned to New York as the action begins in order to get married. But they end up embroiled in solving a series of murders as they also plan their wedding.  The story interweaves both the crime solving as well as their own personal relationship.  The movie climaxes when Nick and Nicky host a magnificent ball in which the murders are solved.  In the vein of classic whodunits, the murder is solved with all of the primary suspects in attendance. The movie ends with a magnificent, sumptuous wedding scene laden with both romance and humor. The wedding is less a “Gay” wedding and more of a traditional wedding with two men.

Most of the action takes place in the rarified world of the ultra wealthy, primarily Manhattan’s Upper East Side and the Hamptons.