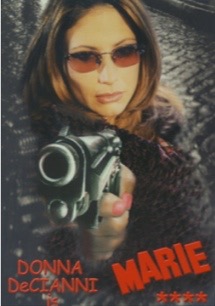 MARIE was an Official Selection of the Long Island International Film Expo (LIIFE) 2001, and won the Best Director Award for Fred Carpenter. The program guide describes “MARIE [as] Charles Bronson in a dress!! This world premiere is the story of Policewoman Marie who becomes a victim of ‘Suicide by Cop’ as she kills a crazy woman threatening to shoot her after a high-speed car chase. Marie discovers that the woman had a toy gun. Marie leaves the force, gets married and her husband gets killed by the mob. Marie becomes a one-woman vigilante against the mob to avenge the death of her husband. Director, producer and screenwriter Fred Carpenter is from Shirley. This film was shot in October 2000 in Long Beach, Lido Beach, Point Lookout, Baldwin, Shirley and Bellport. Language, violence, nudity.”

You Must Be At Least 17 Years Old to Watch This Movie.

Many Saints of Newark, The – prequel to the Sopranos

Married to the Mob
Scroll to top
error: Content is protected !!