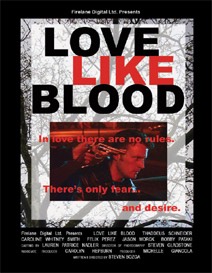 Love Like Blood was chosen as the Best Long Island Film at the Long Island International Film Expo (LIIFE) 2004. As described in the program guide, the film “…explores the struggles of a young man as he attempts to free himself from the consequences of his misspent youth. This Firelane Digital Ltd, film comes from New Hyde Park, New York and was shot in 2002-3. It was shot at AMF Sheridan Bowling Lanes in Mineola, Williston Diner in Williston Park, Eddie’s Pizzeria in New Hyde Park, Five Star Hardware in Valley Stream, Latham Brothers Lumber in Mineola, Filmore Pharmacy in Plainview, and many other locations on Long Island. Language/violence.”