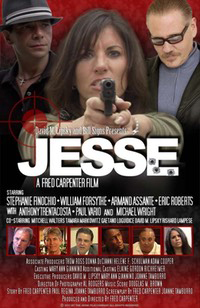 Fred Carpenter’s latest movie ‘JESSE’ was an Official Selection and premiered on July 8, 2011 in the Bellmore Theaters at the Long Island International Film Expo (LIIFE).  It was sold out.    Way to go Fred!!! ~ Helene

The July 8, 2011, screening of the Long Island International Film Expo (LIIFE) is sold out!! A month before the screening woo hoo!  Good work Fred Carpenter.

Fred Carpenter’s movie ‘JESSE’ had its World Premier at the SOHO International Film Festival which took place in New York City on April 15, 2011.

“JESSE” was chosen to be the opening film of the evening. Tickets went on sale March 10, and were sold out in less than two-hours.

Armand Assante in Film That Shot Scenes in Bellmore

Jesse in the News – WCBS-TV covers filming of ‘JESSE’ in Bellmore – Fred Carpenter was filming a shoot for his new film “JESSE”, including a convenience store robbery, when the Nassau County Police mistook it for the real thing (Note: Burt Young was incorrectly identified as one of the stars in the news coverage).

Take a look at the Video – Jesse Interviews

Many people will best know Eric Roberts from his Hollywood movies like ‘The Expendables’ and ‘The Pope Of Greenwich Village’, TV shows like ‘Less Than Perfect’ and ‘Heroes’, or music videos by the likes of The Killers (‘Mr. Brightside’), but the veteran actor also enjoys working on low budget independent films from time to time. Case in point: ‘JESSE’ ~ by Bryan Reesman