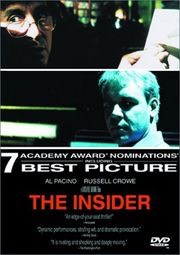 “The Insider” is a 1999 film based on the true story of a 60 Minutes television series segment, as seen through the eyes of a real tobacco executive, Jeffrey Wigand. The 60 Minutes story originally aired in November 1995 in an altered form because of objections by CBS’ then-owner, Laurence Tisch, who also controlled Lorillard Tobacco. The story was later aired on February 4, 1996. The movie was adapted by Eric Roth and Michael Mann from the Vanity Fair magazine article “The Man Who Knew Too Much” by Marie Brenner.  ~ Wikipedia

Inside LLewyn Davis
Scroll to top
error: Content is protected !!