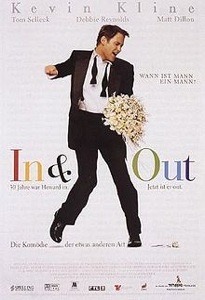 The following info was sent to me from Jeff Rumplik: “The Corner restaurant in Northport, which is a Seafood Restarant, received a whole facade rebuild which made it look like an old building from the 1800’s. When the crew left, they took it down. More than half the trees on Main Street were fake. And, it took them so long to finish the outdoor filming, the real leaves started to change color before they were through.

In the scene where Tom Selleck, who portrays a reporter is dicussing the upcoming wedding and the church is in the backgroud. That shot was taken from Harbor Road, east of the Church.

Production note: The entire town was repainted with names that would reflect the mid west. No one ever knew there was a Harbor just 200 feet away. The employees in the Deli, in case they appeared on camera while working were even wearing shirts with the made-up name of the Deli. The only store that didn’t get a name change was the sporting goods store next to the Diner. That store is gone today.”

In Montauk
Scroll to top
error: Content is protected !!