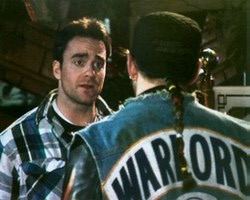 Fighting Irish is an action/drama about one man and his three-year war with an entire biker gang. In the 90s, The Warlords Motorcycle Gang was a fixture in the New York nightclub scene, extorting money from bar owners and basically terrorizing the entire nightclub industry. That all changed at the door to the Carousel East when a down on his luck bouncer named Sean McCarthy took the Warlords actions personal. Filming locations included Tower Records in Carle Place, the Alpine Garden Restaurant in Franklin Square, private residences in Valley Stream and Franklin Square, as well as Carousel East located in Commack.