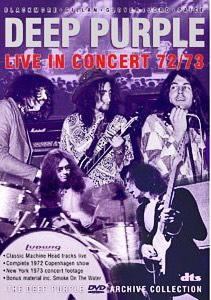 It is the only full concert filmed (in black and white) of the Mk II lineup in this era and features a rare live version of “Fireball“. The DVD release also features three tracks from 1973, filmed during a US concert in New York at Hofstra University in Hempstead, Long Island, in colour. It features the only known video recording of “Smoke on the Water“, performed by the original Mark II lineup. Live in Concert 72/73 is Vol. 1 in a series of DVD archive releases aimed to provide Deep Purple fans with DVDs rounding up as much rare footage from the 1968-1976 era as possible. ~ Wikipedia excerpt

Deliver Us from Evil
Scroll to top
error: Content is protected !!