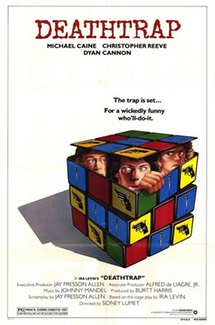 inside a private home in Water Mill

DEATHTRAP (1982) is a thrilling murder mystery adapted from the Broadway show that ran for nearly 10 years. It stars Christopher Reeve, Michael Caine and Dyan Cannon, and was entirely filmed here under the direction of Sidney Lumet, with some lovely scenes shot inside a private home in Water Mill, at the Montauk railroad station and in East Hampton at the railroad station there. One night, the entire area around the railroad station was lit up with “lightning” created by Hollywood’s special effects people as a scene was shot over and over. I personally attended the shoot, at night, at the Montauk railroad station. Reeve, intending to get off in Southampton, has slept through that stop and wakes up at the end of the line. He gets out and finds a cab operated by a local lady who’s a real character and will take him back to the Hamptons. Temporary tracks were set up in the station parking lot so the cameras could dolly in and out.

Definite Maybe, The
Scroll to top
error: Content is protected !!