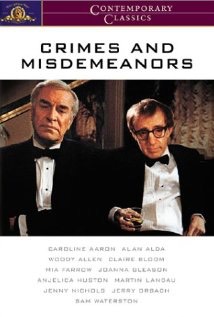 “This is a great and wise film. Woody Allen writes with acid wit but also a social and spiritual consciousness that gives Crimes and Misdemeanors its echoes of Bergman. Is there moral order? Is there God? Maybe, Allen’s film suggests, but learn how to punch, just in case.” ~ Daniel Montgomery | Culturazzi.com

Sven Nykvist, the cinematographer on Crimes and Misdemeanors, shot his first film in 1945. Nykvist first worked for Ingmar Bergman in 1953, and then became Bergman’s camerman and collaborator in the early-1960s. Nykvist is best known for his subtle and luminous camera work in many of Bergman’s films. He won Oscars for Cries and Whispers in 1972 and Fanny and Alexander in 1983. Working with directors in this country, he shot movies such as The Unbearable Lightness of Being and Allen’s Another Woman and Crimes and Misdemeanors.