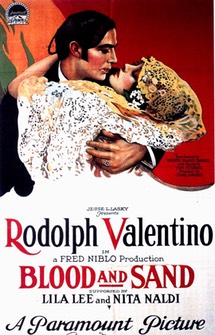 Long Beach (aerial view) was used to depict the Sahara

On August 15, 1926, while on a promotional tour, Valentino collapsed at the Hotel Ambassador in New York City. He was hospitalized at the Polyclinic Hospital and underwent surgery soon thereafter for appendicitis and gastric ulcers. Despite this surgery, and just as he appeared to be recuperating, Valentino developed peritonitis and took a turn for the worse. When his fans got word of his impending death, the hospital received thousands of calls per hour. Valentino died on August 23, 1926, at the age of 31 of complications arising from surgery and his weakened condition. Upon news of his death, it was reported that two or more despondent fans allegedly committed suicide. Valentino had requested a public funeral and, before his burial in a Los Angeles crypt, thousands of hysterical fans viewed his body over a three-day period at the Frank E. Campbell Funeral Chapel in New York City. At one point there was a riot around the building in which 100 people were injured.

Beware the Night (aka as Deliver Us from Evil)